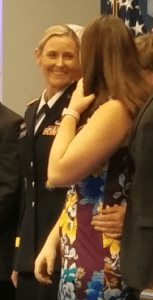 Smiling at her daughter

When you think about that girl in high school that everybody knew, liked and respected (at a small town, American high school) or the athlete that played year-round sports like a pro, or the student who was top of her class and a leader to her peers, those personas are all rolled up into my guest on today’s podcast.

Joy Curriera, who we all knew back then as Joy Ebberson, is a friend since 10th grade. We went to the two opposing junior high schools that fed into one high school, Pasco High School. We were volleyball adversaries that became volleyball buds. 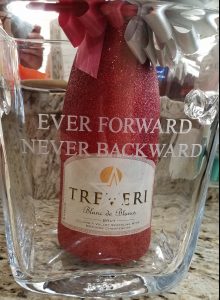 Since high school, she has had an amazing career that started at the United States West Point Military Academy, culminating in a major military promotion last summer at the Pentagon Hall of Heroes that my family was fortunate to attend.

Oh my goodness, this woman has had quite the career. I asked her to share her story because it is a true story of what someone can achieve in their life if they just take some chances.

In this first of two episodes we talk about her humble beginnings in Eastern Washington, her time as a cadet playing volleyball at West Point, which had only opened to women cadets 10 years prior, the career that took her to Europe and around the US, the challenges of marriage to another cadet and raising children in a military family.  She talks openly about all these things and more.

Tune in to hear all the details.

Avea Financial Planning, LLC is a Registered Investment Advisor in the State of Washington.